A Group of Tickets and Passes Related to Horse Racing 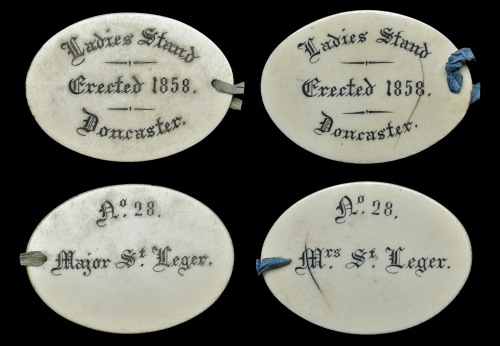 Major John St Leger, JP (1823-1905), Park Hill, Rotherham, eldest son of Lt-Gen. John Chester (1779-1857), of Ashtead, Surrey, married Philippa Roper (1826-1909), daughter of John Bonfoy Roper, MP (1778-1855), Abbotts Ripton Hall, Huntingdonshire, on 8 April 1858. As John Chester he served in the 53rd Foot in the Sutlej campaign and was present at the battles of Aliwal and Sobraon, wounded on both occasions, then transferred to the 85th Foot. He was a magistrate for Norfolk and the West Riding of Yorkshire. His grandfather, brother to the 1st Lord Bagot, assumed the name Chester, and afterwards that of St Leger, under the will of his cousin, but it was not until 1863 that the surnames of John and Philippa were changed to St Leger. It is assumed that Mrs St Leger’s pass should have been numbered 29.

The famous St Leger horse race, one of the classic fixtures on the racing calendar, was first run as a sweepstake in 1776 over a 2-mile course on Cantley Common, Doncaster.