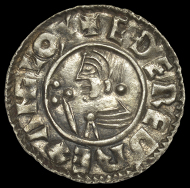 The following hoard of 99 coins (81 pence and 18 cut halfpence) was found by Don Crawley (pictured) in East Anglia in 2017 and disclaimed under the terms of the 1996 Treasure Act in the summer of 2019. The coins comprise a most unusual group amassed and buried within a few years of the first millennium.

The conventional dating of the coinage of Æthelred II predicates a six-year recoinage cycle covering the king’s reign (979-1016). The Crux issue is thus dated to the years c. 991-7, while the ensuing Long Cross issue spans the period c. 997-1003. This hoard is numismatically extraordinary, particularly with regard to the 59 fully identifiable Crux coins. Almost all of these can be designated as ‘Small Crux’ type (Hildebrand type Ca), struck on small module and lightweight flans, a later sub-issue of the main type and dated after c. 995. In line with J.J. North’s English Hammered Coinage, p.161, we have chosen the perhaps slightly arbitrary weight of 1.35g (20.8 grains) to separate the two varieties of the issue.

Out of a total of 59 coins, only six are regular Crux issue with a weight over 1.35g, while 53 weigh less; some much less, tipping the scales at no more than 0.80g. For such a preponderance of rare and unusual varieties to occur in a single hoard is indeed unexpected. Geographically, these pieces originate almost entirely from eastern mints: Cambridge, Colchester, Huntingdon, Lincoln, Louth, Melton Mowbray, Norwich, Stamford, Thetford and York [and see footnote to lot 35 for the coin of Malmesbury].

The hoard would appear to consist of two distinct parts; the Crux coins as described and originating mostly from Lincolnshire, East Anglia and Essex, while the subsequent Long Cross coins show a more southern distribution, with 10 out of 19 struck at London. Most of these latter pieces, as well as the 18 cut halfpence, show little sign of circulation, suggesting a terminus ante quem of no later than 1003.

Since being disclaimed, most of the coins have been carefully cleaned and this process has revealed apparent differences in the fineness of metal. Unfortunately, in the few weeks available to catalogue the hoard, it has not been possible to commission specific gravity or x-ray fluoroscopy tests, but observation suggests that the sole coin of Colchester, together with some of the specimens from Stamford and Thetford in particular, are rather less than sterling fine. One small light coin of York (lot 60) could well pass as a Scandinavian copy but for the secure English provenance and the tight dateline provided by the hoard. One wonders if, around 996, Æthelred decided to ‘short-change’ the Vikings by buying them off with poor quality, lightweight coinage. The subsequent heavy, fine silver Long Cross issue (see lots 62-80), suggest the recipients were not fooled for long and presumably made their feelings on the matter abundantly clear. Alternatively, with the bulk of available specie being exported, perhaps the home populace were left with a substandard circulating medium.


Deposition
The coins were found under the remains of a Saxon church believed to have been demolished
soon after the Norman conquest. Might the two unusual and precisely folded pennies represent a religious offering – part of a payment donated to the Church by a repentant sinner, frightened by the approaching Day of Judgement in the year 1000?

Highlights of the Hoard
Cambridge
Although only three coins of Cambridge are present, they are all remarkable in their own way. The coin of Eadmund has a forked or trident sceptre and a Small Crux portrait of the king with monk-like hairstyle, while the specimen struck by Eadwine has extravagant swept back hair and an abstract profile made up of pellets and dashes. Most remarkable of all is the coin of Leofwine, a moneyer apparently unpublished for the mint and featuring a Late Transitional Crux portrait with hair ties and sceptre. Bearing in mind the Lincolnshire bias of the current hoard it is interesting to note that a moneyer Leofwine struck coins at Stamford in the Long Cross type and at Lincoln and Stamford in the Last Small Cross type.

Lincoln
The Crux coins of Lincoln are the most numerous (18 examples, of which eight are by the moneyer Theodgeld) and full of scarce and unusual varieties, many showing extra pellets in one, two or all four quarters of the reverse – variants only found on the Small Crux type (see H.A. Parsons ‘Symbols and Double Names on Late Saxon Coins, BNJ 1917, pp.1-74). In the standard work on the mint, Mossop lists few of these unusual coins, making exact die identification with published specimens impossible in many cases. The only remarkable Long Cross coin in the hoard is by the moneyer Drengr, with a letter D in the third quarter of the reverse and struck from the same dies as Mossop pl. vii, 31. It is extremely rare.

Louth
The hoard includes a pair of unpublished coins of the moneyer Drengr for the mint of Louth, struck from different obverse and reverse dies. Drengr is not known at Lincoln during the Crux period but was a prolific moneyer there in the next three types; he may well have started his career at Louth. A mint at Louth (25 miles ENE of Lincoln as the crow flies) has previously been postulated (see Studies in Late Anglo-Saxon Coinage, pp.89 and 351). Four coins have been cautiously attributed to the mint: two of Edward the Martyr, one with the mint name LVVEIC, by the moneyer Ætheln (a moneyer only otherwise known at Horncastle, a mere 13 miles away), a second of Lincoln style with the incomplete mint reading LV (SCBI Edinburgh 655); and two of Æthelred II, a fragmentary First Hand coin reading LVDEV and a Long Cross issue attributed to London by Hildebrand reading OSGVT M’O LVD, although Osgeat is known only at Lincoln and Huntingdon.

Malmesbury
Since most known specimens read EALDRED, this may be an unpublished variety of the moneyer’s name, although Eadred and Ealdred are normally considered to be different names. The mint reading is normally MALD, yet the current coin has an uncertain letter or symbol (rather like a pellet and crescent) after MAL. Given the predominance of eastern mints in the hoard, making Malmesbury a geographical outlier, in this case MAL might possibly represent Maldon in Essex, although on the coinage this is normally spelt MÆL with an Æ diphthong.

Melton Mowbray
A pair of unpublished coins of the moneyer Ketill for the mint of Melton Mowbray, struck from
different obverse and reverse dies. Mark Blackburn, in an article in BNJ 2000, pp143-6, discusses the attribution of coins with the mint signature MEDELTVN to Melton Mowbray, altering Dolley’s previous attribution of a fragment reading MED to Peterborough (Medeshamstede). Apart from Dolley’s fragment, a First-Hand type of the moneyer Hild, a second example of this coin is now in the Fitzwilliam Museum, having been found in Hampshire in 1999. An unspecified type of Æthelred II with the uncertain moneyer’s name Piztan derived from a 19th century hoard from Quendale (Shetland) and is now unfortunately lost. The fourth known specimen is a Cnut Quatrefoil type of the moneyer Leofdæg in the Berlin Museum Collection (SCBI Berlin 650)

Stamford
Amongst the nine Crux coins of Stamford, the moneyers Æscwig, Svartlingr and Wulfmær are not listed by Hildebrand for the type and are all very rare. The coin of Godleof has the letters in the angles of the cross disposed VXCR.

Thetford
The moneyer Deorwulf is not mentioned by Hildebrand, Carson or in Studies in Late Anglo-Saxon Coinage. EMC lists only two coins of Deorwulf struck under Æthelred II, a Long Cross type from London and a Last Small Cross type from York.

York
Another unpublished moneyer for the mint – Colsveinn – not known at York but a single specimen is known by a moneyer with the same name struck at Lincoln during the Last Small Cross type (SCBI Berlin 516). The moneyers Dagfinnr and Oskettil are not listed by Hildebrand for the type, both are very rare.
Jim Brown