The ‘Merchant of the Islands’ Collection of Admiral Vernon Medals 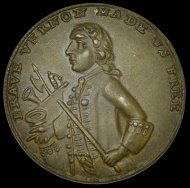 Admiral Vernon medals were issued beginning with Admiral Edward Vernon’s capture of the
Spanish treasure port of Porto Bello on November 21, 1739. This war was the result of years of depredations on British shipping by the Spanish Guarda Costas. To be fair, Spain had implemented the Guarda Costas to prevent the rampant smuggling into Spanish territory which was going on even though Britain held the Asiento which gave them a monopoly on the slave trade as well as annual ‘register ships’ which were permitted to trade in designated Spanish ports. Of all the incidents, the proximate cause was the loss of the auricular appendage of one Robert Jenkins.

The unfortunate Jenkins was captain of the Rebecca of Glasgow, returning to England from
Jamaica via the Gulf, with a cargo of sugar, when he was becalmed east of Havana on 9 Apri 1731. She was boarded by the crew of a Guarda Costa row galley under the command of Juan de León Fandiño. When no Spanish goods were found, the Rebecca was rifled for cash, charts, navigation instruments and valuables. In the course of this, Jenkins was hoisted numerous times from the foremast and dropped to the deck and his ear cut off by Fandino with his cutlass. With the words "the same will happen to him (the king) if caught going in Spanish waters”, Fandino then restored the severed appendage to Jenkins. At the time the incident received little attention, but was reported in The Gentleman’s Magazine in June 1731 as well as in Benjamin Franklin’s The Pennsylvania Gazette of 7 October 1731.

In the spring of 1738 Jenkins repeated his story, with dramatic details, before a committee of the House of Commons, producing his severed ear (pickled in a jar). With the words in Parliament “I will take Porto Bello with six ships only” Edward Vernon set the course for yet another war with Spain. By the summer of 1739, all diplomatic efforts were exhausted and George II, on 10 July, directed the Admiralty to initiate maritime reprisals against Spain.

Assuming Vernon would meet the same disastrous fate as Admiral Hozier some twelve years earlier, Prime Minister Robert Walpole gave Vernon his ships. When Vernon succeeded spectacularly, England went wild with a flood of privately issued medals. This success prompted a second massive amphibious assault on Cartagena with the British army and American volunteers joining in. The initial naval attacks were successful but the final assault on the city was repulsed due to the vigorous defence led by the oneeyed, one-armed, one-legged soldier of the king, Don Blas De Lezo, a lethargic British army with too short scaling ladders and ultimately the advent of Yellow Jack. With this, the expedition to conquer Spain’s colonies in the New World ground to an inglorious end.

The medals here offered are the result of over 30 years of searching. Also included in this sale are a number of relevant books from my library. I commend them to you. Study them closely and the personalities, places, events, trials and tribulations of this swashbuckling era will come to life.

Happy Collecting,
A Merchant of the Islands