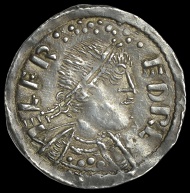 This important collection of British coins, spanning the Iron Age, Roman, medieval and early modern periods, with select later additions, was begun in 1962 when its creator, Marvin Lessen, first moved to Scarborough to work at the early warning radar site at RAF Fylingdales.

PREFACE TO PART III
This third sale of coins from the Lessen collection covers the English period from Henry VII to modern times, as well as Scottish, Irish and Anglo-Gallic coins. The auction finishes with a small group of Yorkshire tokens.

In endeavouring to collect silver coins of the main coinages and types within each reign, Mr Lessen concentrated on groats and, for the later period, shillings. Collectors of these denominations in particular will find much of interest within these pages. Worthy of special mention are examples of the earliest English coinrelated piece to bear a date of any kind (Lot 891) and, in the same idiom, an Edward VI pattern shilling, the first English coin to carry a date in Roman numerals (Lot 858). With relatively few exceptions, this portion of the Lessen collection was formed before 1980, so this is an opportunity for present-day collectors to acquire specimens that have been off the market for several decades.

To aid future students and for continuity, the lot numbering sequence follows that of Parts I and II of the collection, sold in these rooms on 25 April 2018 and 3 July 2019.

PREFACE TO PART IV
This fourth sale of coins and medals from the Lessen collection is an important standalone group of coins, medals and seals of Charles I, the Commonwealth, Oliver Cromwell and Charles II, roughly spanning the years 1630-1665.

Thomas Simon, the English medallist, was born in London in the spring of 1618, the fourth son of Peter Simon, a native London merchant of French descent living in Walbrook, and Anne Germain, of Guernsey, and died there in the summer of 1665. Considered by many to be the premier English medallic artist, he was apprenticed to Edward Greene, the chief engraver at the Tower Mint, in 1635, where he would have come under the influence of Nicholas Briot. His apprenticeship ended at Michaelmas 1642, after the commandeering of the Tower Mint for Parliament. An avowed Puritan, Simon rose to become chief graver and medal maker for the Mint during the Commonwealth and Protectorate (when the works of Jean Warin at the Moulin in Paris must also have influenced him, possibly when he worked with Peter Blondeau, who arrived in England in September 1649); his appointment as such was made by the Council of State in April 1649. After the Restoration he was demoted to ‘one’ of his majesty’s chief gravers at a time when his rival, John Roettiers, was gaining ascendency. Simon’s use of puncheons for his dies and the screw press was his mode of operation, coupled with edge marking usually applied with Blondeau’s process.

The catalogue arrangement is intended to emphasise Simon’s personal work – the originality, and thus importance of the coins and medals, by generally grouping them as such, and by separating categories by period (parts I-XI). Later, commercially-oriented productions of medals, casts, copies and restrikes, with a few exceptions, are grouped in their own sections, since they are not Simon’s original work. Multiple dies in the Charles II hammered series were acquired and listed where practical and possible. All denomination types of the Commonwealth currency, including a date-run of shillings, were traded with Spink in 1970, as were the Dutch and Tanner crown, shilling and sixpence. Weights for coins have been additionally stated in grains.

To aid future students and for continuity, the lot numbering sequence follows that of Parts I, II and III of the collection, sold in these rooms on 25 April 2018, 3 July 2019 and 29 January 2020.