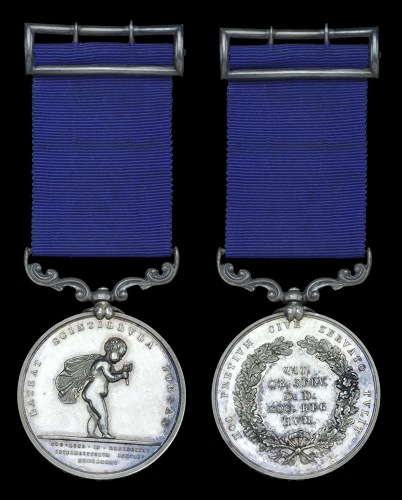 R.H.S. case no. 20,286:
‘On the 4th August, 1876, two young men (one Batty, an Englishman, and a Frenchman) were bathing in the sea at Biarritz. They being ignorant of the locality got into a current which carried them out into the breakers, where they must have perished had not M. Felix Labat, who knew the neighbourhood, gallantly swam out to their assistance, and seizing the two supported them (one in each hand) for some minutes. Unfortunately the two young men, in their fright, began to struggle, and seizing Labat, all three sank. Freeing himself, Labat alone rose to the surface, and recovering his breath, he dived, and a second time took hold of both the drowning men and, seeing the life-boat approaching them, he supported them for about sixty yards, swimming out to sea from the breakers, the current rendering it impossible to reach the shore. Unfortunately the life-boat came up at such a rapid rate that it passed over Labat’s shoulder, hurting him much, and striking Batty on the head, took him from Labat’s grasp, and he sank never to rise again. M. Labat, however, notwithstanding the injury he had himself received, held on the other young man, and ultimately the boat took both on board and saved their lives.’