A Small Collection of Egypt Medals awarded to Employees of Messrs. Lucas and Aird 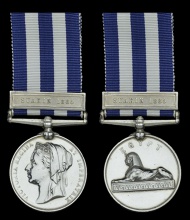 Among the main objectives of the second British expedition to set foot in the eastern Sudan in 1885 was the construction of a railway line from Suakin to Berber. It was, to quote the historian Thomas Archer, an effort to ‘smash the Mahdi’ by means of the ‘latest resources of civilization.’ Indeed had all gone to plan, a 280-mile railway line would have been constructed, thereby securing the protection of the eastern Sudan. In the event, however, it proved to be an expensive red herring: as some had rightly observed from the outset, an exercise on this scale, in enemy territory, would have to involve round the clock protection for the civilian construction workers, and, with the difficult climate and terrain, a good deal of luck.

The contract to carry out this monumental task was awarded to the British company Messrs. Lucas and Aird. In the official minute issued by the Government, the company was to construct ‘for the War Department for the purposes of the Expeditionary Force sent out to Suakin, and, according to the orders and under the control of the General Officer for the time being in command of the same force, a 4ft. 8.5ins. gauge single line of railway from Suakin, and thence in sections to so far towards Berber as may from time to time be ordered by the Secretary of State. The War Department engages to keep the way clear and the working-staff protected.’

The staff of Lucas and Aird were to be paid by the Government and their rations and clothes supplied by the War Department and, if an employee died as a result of enemy action, or the climate, his next of kin would be paid a gratuity equal to one year’s salary. Otherwise, the assorted navvies would receive a daily payment of 12 shillings, a small fortune for the day. And quite a sight they must have made, working alongside the military, in their bowler-hats. Certainly their language was colourful enough, an Army Padre who was billeted alongside one of their huts having his vocabulary ‘widened by the experience’ (Henry Keown-Boyd’s A Good Dusting refers).

Yet, as predicted from the outset, their endeavours quickly attracted hostile interest from Osman Digma’s tribesmen. In fact, for the purposes of safety, while the military fought out such battles as that at Tofrek on 22 March 1885, Lucas and Aird were instructed to halt progress. By early April, work had recommenced but General Graham, still concerned for the safety of the navvies, ordered an advanced zeriba to be established five miles along the road to Handoub to cover the head of the railway, and a block-house and another zeriba to be built at Handoub itself, while covering parties were to protect the head of the railway as it advanced. Owing, however, to the growing heat, the difficulty confronted in obtaining water supplies, and the fact that many local tribesmen continued to act with hostility, progress was slow and painful, and by the time General Graham ordered a halt to the project, the railway line had advanced just 20 miles to the town of Otao: ultimately the British withdrew from the Sudan and the railway project was abandoned at a cost of £865,000 to the Government.

Added to that cost was the distribution of the relevant campaign medal and clasp to the navvies of Lucas and Aird, the relevant roll (WO 100 68) revealing and extremely interesting and varied head count of 475 employees. In all the Company was represented by some 30 different types of employee, Blacksmiths, Boilermakers, Carpenters, Cashiers, Clerks, Cooks, Engine Drivers, Firemen, Foremen, Guards, Pipelayers, Platelayers, Ropemakers, Roperunners, Storekeepers and Traffic Managers among them: and each and every Medal was duly engraved with the recipient’s relevant job title.