A Collection of Medals and Tokens Relating to S.M.S. Emden, the Property of a Gentleman 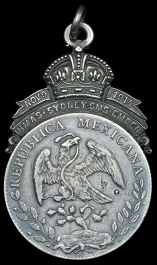 S.M.S. Emden, a Dresden class light cruiser, was built at the Imperial dockyard at Danzig and launched in July 1909. The vessel was part of the German East Asia squadron, based in Tsingtao, and in 1913 came under the command of Karl von Müller (1873-1923). In a daring but short career of destruction in the opening weeks of the War, the Emden wrought havoc in the Indian Ocean. Between 10 September and her destruction by H.M.A.S. Sydney on 9 November 1914, she had captured or sunk no fewer than 23 ships, including a Russian cruiser and a French destroyer in the battle of Penang on 28 October 1914. The combined value of the captures was estimated at £4 million. Arriving off the Cocos Keeling islands the Emden sent 53 men, under the first officer, Kapitänleutnant Hellmuth von Mücke (1881-1957), ashore to destroy the wireless apparatus at Port Refuge. A wireless message sent before those on the station were overpowered by the Germans was picked up by the Sydney, 52 nautical miles away. The Germans believed they had sufficient time to decommission the wireless station and for the landing party to rejoin the Emden, but with the rapid arrival of the Sydney von Mücke’s men had to be left to their own devices while von Müller attempted to retaliate to the superior firepower of the Sydney. Within the space of an hour the conflict had concluded and von Müller beached the Emden on North Keeling island, raising white flags of surrender. In the battle the Emden lost 133 officers and men killed, out of a crew of 376, while Sydney had four crewmen killed and 13 wounded.

Von Müller and his surviving crew were captured and taken to Malta, from where in October 1916 he was taken to England and interned with other German officers at Sutton Bonington, Nottingham. In 1917 he led an escape of 21 prisoners through an underground tunnel, but was recaptured and, as part of a humanitarian prisoner exchange, sent to another camp at Noordwijk-am-Zee, Holland.

Von Mücke and his landing party seized a derelict schooner, the Ayesha, made her seaworthy, renamed her Emden II, and escaped the attentions of the Sydney by sailing her to Padang, Sumatra. There, a German freighter transported them to Hodeida, Yemen. After many adventures in the Arabian peninsula, including an overland journey along the Red Sea and battling hundreds of armed Bedouin tribesmen, von Mücke and 48 other survivors arrived in Constantinople in May 1915, from where they returned to Germany.