A Collection of Medals to the Black Watch 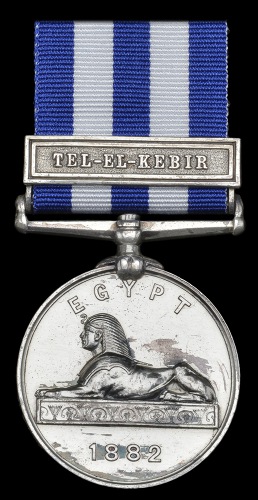 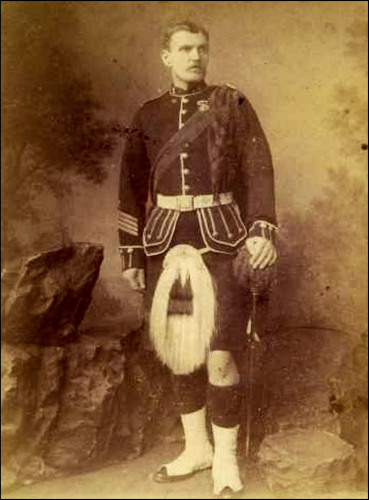 John McNeill was born in the Parish of Cupar, Fifeshire, in about 1846, and enlisted into the 42nd Foot at Stirling on 16 August 1864 giving his trade as that of a baker. Promoted to Corporal in July 1869 and to Lance-Sergeant in April 1873, he re-engaged in November 1873 and was promoted to Sergeant in July 1874. He was appointed Colour-Sergeant in January 1879 and Regimental Sergeant-Major on 28 December 1881. He served in the Ashanti campaign of 1873-74 (Medal with clasp) and was killed in action at Tel-el-Kebir on 13 September 1882. The regiment had killed or died of wounds at Tel-el-Kebir, three officers, Sergeant-Major McNeill and 9 men.

The following appeared in The Black Watch Chronicle 1914 and is an extract from Recollections and Reflections, by Sergeant John Gordon, late Black Watch:

‘One of the saddest events in the experience of a soldier is the roll-call following a battle. After reaching the village of Tel-el-Kebir, Colonel Macpherson requested the captains of companies to call the roll, in order to find out who were missing. It was soon discovered that Sergt.-Major John M’Neill was among the missing. He was a man beloved by every man in the Regiment from the Colonel to the drummer-boy. He was, I think, without exception, the finest specimen of a Highlander in the Regiment, not only in physique, but in his whole bearing as a man of character. His sense of justice in dealing with complaints which were brought before him commanded the respect of even the man who was in the wrong, while his sympathy made him beloved by all who knew him. When the fact that he was missing was brought to the attention of Colonel Macpherson he immediately sent Lieutenant and Adjutant Lee back to the battlefield to ascertain, if possible, his condition. When Adjutant Lee returned and rode up to Colonel Macpherson to make his report there was a deathly stillness. One could have heard a pin drop even in the desert sand. I remember well the sighs throughout the entire Regiment when the men heard the dreaded words: “Sergt.-Major John M’Neill is dead.” We afterwards learned that when Sergt.-Major M’Neill reached the top of the entrenchments he found a situation similar to that described by Captain Fox, and that before he was mortally wounded by a shot through the abdomen he had cut down several of the Arabs with his claymore. He lived only an hour.’

Sold with copied portrait photograph and photograph of his grave, together with other research. Sergeant-Major McNeill’s Ashanti medal is held by the regimental museum at Perth.