The Collection of Life Saving Awards formed by The Late W.H. Fevyer 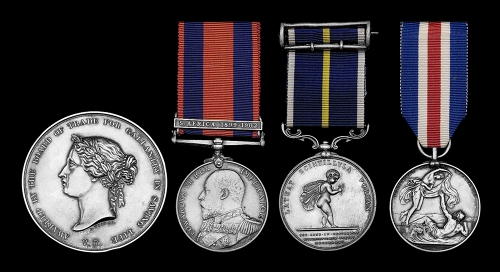 A Board of Trade Medal for Gallantry in Saving Life at Sea group of four awarded to Second Engineer William MacDowell, S.S. Afghan, awarded three lifes aving medals for endeavouring to save life from the wreck of the Taher off Mauritius, 1901

‘On the morning of the 22nd March, 1901, the S.S. Taher in trying to enter the harbour at Port Louis, Mauritius, struck the reef on the outer side of Barkley Island. There was a heavy ground swell at the time, with the surf setting onto the reef. From the moment of striking the seas broke clean over the fated ship. There were in all eighty-eight persons on board, a number of whom jumped overboard, or tried to save themselves in a boat which was carried away from the davits. It being practically impossible to approach the wreck from the island owing to the tremendous surf, it was decided to attempt the rescue from the seaward side. Volunteers were accordingly called for from English ships in the harbour and fourteen men were selected from those responding to the call, two lifeboats were manned, and under the guidance of an experienced pilot endeavoured to reach the vessel. Unfortunately both boats were capsized in the surf and three of the brave occupants drowned, the other twelve, including the pilot, being washed on shore, all of them suffering severe injuries. Seventeen of those on board the Taher were also lost’. (Ref. R.H.S. Case No. 31232).

The twelve men surviving the attempted rescue were each awarded the Royal Humane Society Medal in Silver. The relatives of the three who lost their lives were each awarded an ‘In Memoriam’ Testimonial. For another medal for this rescue, see lot 76.

William McDowall was awarded the Transport Medal with clasp for South Africa as 2nd Engineer aboard the P.& O. ship Pekin. Sold with copied research.