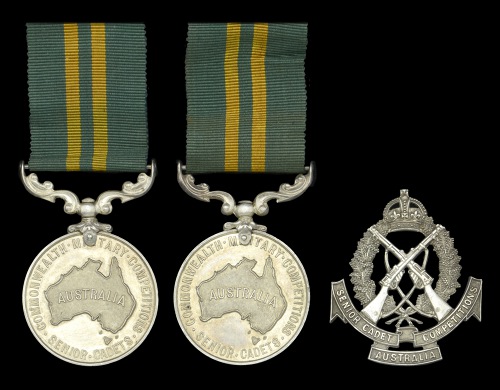 The rich and interesting history of cadets in Australia stretches back to 1866 when the first unit was established at St. Mark’s Collegiate School, New South Wales. This unit subsequently became the King’s School Cadet Corps in 1869. Remaining under State auspices until 1906 when the Commonwealth Cadet Corps was established, conscription for part time home service, including service by cadets, was introduced in 1909 and, under the Defence Act of 1903, the Corps was included in the provisions for Universal Military Training. Compulsory training for all male school children started in 1911, with 92 Cadet Battalions having been formed, comprised of 922 Companies.

The Australian Senior Cadet Competition ran each year from 1911 to 1914. There were four stages with winners of each stage advancing from the Battalion, District, Brigade and then finally Commonwealth. Battalion winners received a cloth badge, District and Brigade winners a silver medal and there was a gold medal awarded to the Commonwealth winners. In the period 1913-14 before the competition was disbanded, the medals were changed to silver (Brigade), silver and enamel (District) and gold for the winners.

Three awards to one recipient may be unique. No other group is known to have survived where a recipient has won an award for each year of the competition.