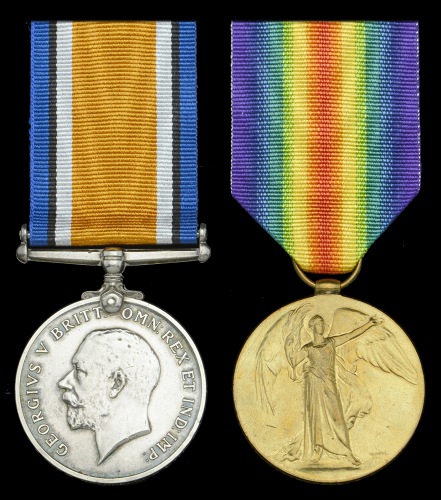 Pair: Private M. Scannell, 4th Light Horse Regiment, Australian Imperial Force, who was on the strength of the Regiment at the time of their cavalry charge at Beersheba, 31 October 1917 and was subsequently wounded during the Es-Salt raid on 4 May 1918

Morgan Scannell was born in Cork, Ireland in 1885 and attested for the 16th Reinforcements to the 4th Light Horse Regiment, Australian Imperial Force, at Melbourne, Victoria on 28 December 1915. He embarked from Melbourne for Egypt on 18 April 1916 and joined the 1st Light Horse Training Regiment at Tel-El-Kebir on 29 May 1916. Transferring to the Australian Camel Training Regiment on 2 November 1916, he was then taken on the strength of the 4th Light Horse Regiment at Ferry Post on the 25 February 1917.

Scannell’s arrival coincided with the regiment forming a third squadron, known as B Squadron, consisting of four officers and 112 other ranks, which he likely joined and he would have been present with them at the time of the regiment’s celebrated charge to take Beersheba on 31 October 1917. On this occasion, late in the afternoon, together with the 12th Light Horse Regiment, they advanced over open ground in a pure cavalry charge, getting under the Ottoman guns and capturing the town. Over 700 Ottoman soldiers were captured and, more significantly for the Australians, the vital water wells were secured. In achieving this, the 4th Light Horse Brigade lost 35 men men killed and 39 wounded.

With Beersheba captured, Gaza soon fell. The Light Horse then began to push the Turks back into the Judean Hills and after a gruelling winter campaign, Jerusalem was taken by year-end. The following year, the Light Horse advanced up the Jordan Valley and Scannell was wounded (gun-shot wound to the head) on 4 May 1918 during the raid on Es-Salt (Second Trans-Jordan attack). He was admitted to the 14th Australian General Hospital at Port Said on 11 May. Rejoining the 4th Light Horse on 20 July 1918, he served throughout the rest of the campaign, and was likely present at Kaukab on 30 September 1918, when the 4th and 12th Light Horse Regiments charged mounted with the sword and routed the Turkish defenders who broke and fled. Scannell returned to Australia on 9 July 1919 on the Prinz Ludwig and was discharged on 13 January 1920.