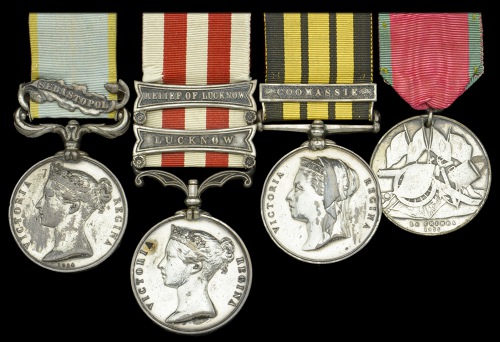 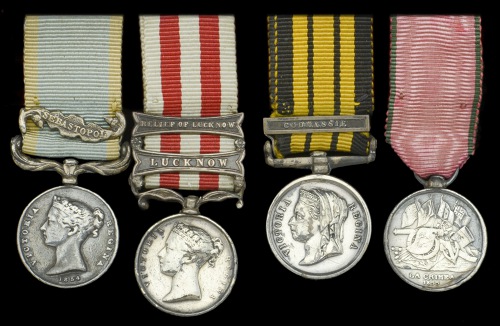 The fine campaign group of four awarded to Colonel J. De Vic Tupper, 23rd Royal Welsh Fusiliers, who was severely wounded at the second attack on the Redan, Mentioned in Despatches for gallant conduct at Poonah during the Indian Mutiny, and rewarded with the Brevet of Lieutenant-Colonel for his services under Sir Garnet Wolseley during the Ashantee Campaign

James De Vic Tupper was born on 13 November 1832, the son of Carré William Tupper of Hauteville House, Guernsey.
He entered the Army as an Ensign without purchase in the 23rd Foot on 15 December 1854 and had obtained a Lieutenancy by March. Landing in the Crimea on 10 August 1855, he was present with the 23rd Foot at the Siege and Fall of Sebastopol and also at the second assault on the Great Redan, 8 September 1855, during which he was severely wounded in the right ankle joint, receiving 18 months gratuity and a temporary pension of £70. The Regiment was awarded two Victoria Crosses for this final assault on the Russian earthworks but the intense enemy fire had accounted for 263 casualties to the 23rd including 14 out of the 18 officers as they led their men across the 285 yards of open ground to their objective.

Tupper subsequently proceeded with the Regiment to India, and saw service during the Great Sepoy Mutiny in Bengal from 16 June 1857 until 26 July 1859, being present at many engagements including the Relief of Lucknow by Lord Clyde in November 1857; the defeat of the Gwalior Contingent at Cawnpore in December 1857; the affair of Ramgunga; the Siege and Capture of Lucknow in March 1858 and operations across the Goomtee under Outram; the Storm and Capture of the Selimpore and and Simree Forts and the actions of Jubrowlie, Poonah (mentioned in despatches), Beerah and Baxarghat; also the Trans-Gogra operations when the rebels were driven from Oude into Nepal.

Advanced Captain with purchase in April 1859, aside from home employment, Tupper served 4 years in Malta, 10 months in Gibraltar and 14 months in Canada before winning his Brevet Majority in July 1872. He next embarked for the Gold Coast on 21 November 1873 with the 2nd Battalion, 23rd Fusiliers, campaigning in the second phase of the Ashantee War under Sir Garnet Wolseley, services for which he was rewarded with the Brevet of Lieutenant-Colonel. He was appointed Major in August 1879 and Lieutenant-Colonel on 1 July 1881, on which date he then retired with the Honorary rank of Colonel. He died on 23 December 1881.