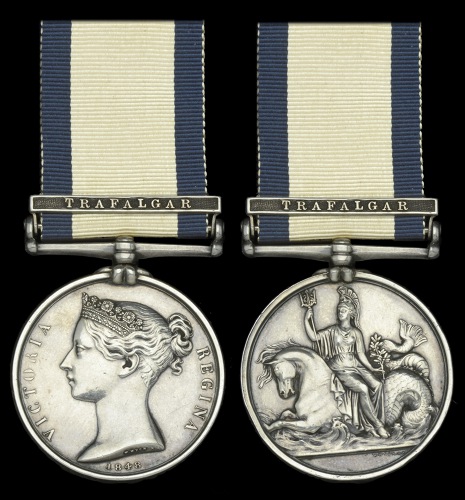 George Edward Cocksedge was born in Suffolk and entered the Navy 14 November 1798, as First-class Volunteer on board the Impétueux 78, Captain Sampson Edwards, in which ship, and the St. George 98, commanded by the same officer, he served on the Channel and Mediterranean stations, until February 1801. During the next four years he successively joined, as Midshipman, the San Josef 110, bearing the flag of Lord Nelson, Lapwing 28, Captain Edward Rotheram, and Plantagenet 74, Captains Graham Eden Hamond and Hon. Michael De Courcy; and while in the latter vessel, besides convoying a fleet of Indiamen to St. Helena, assisted in capturing, 27 July 1803, L’Atalante corvette, of 22 guns. On subsequently removing to the Polyphemus 64, Captain Robert Redmill, flag-ship afterwards of Rear-Admiral George Murray, he further bore a part in the battle fought off Cape Trafalgar, 21 October 1805, and witnessed, in July 1807, the unsuccessful attack made on Buenos Ayres by Lieutenant-General Whitelocke. Between 1809, in which year he obtained a commission, and 1813, Mr. Cocksedge next served, in the West Indies, North America, and German Ocean – nearly the whole time as First-Lieutenant – on board the Shark sloop, Captain Groves, Dispatch 18, Captain James Lillicrap, Franchise 36, Captain Charles Dashwood, Gorgon armée en flûte, Captain Alexander Milner, Calliope 20, Captain John M‘Kerlie, and Cretan brig, Captain Charles Frederick Payne. He was placed on the reserved list in 1851 and died in 1860.