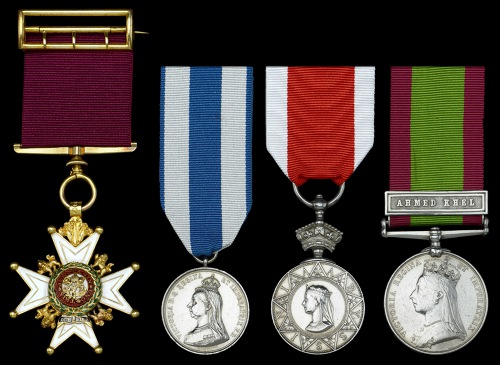 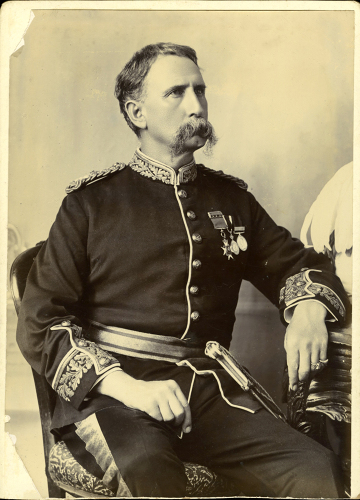 A well-documented Victorian C.B. group of four awarded to Lieutenant-General M. H. Nicolson, Bombay Infantry, who served as Aide-de-Camp to Queen Victoria, was twice Mentioned in Despatches, Commanded a Column during the Zhob Valley Expedition of 1890, and designed the Nicolson Pattern Cavalry Boot

Malcolm Hassels Nicolson was born in June 1843, the son of Major Malcolm Nicolson, Bengal Army. He entered the Indian Army as an Ensign in the Bombay Infantry in December 1859, aged 16, and was promoted Lieutenant, January 1862. His first active service was in the Abyssinian War 1867-68, during which he was present at the action of Azogee and the capture of Magdala. Promoted Captain, October 1869, and Major, December 1879, he served on the Staff as a Brigade-Major during the Second Afghan War from 31st August 1879 until the 5th August 1880, during which he was present at the occupation of Kandahar and in the advance towards the Helmand River, and took part in the Battle of Ahmed Khel, and the action at Urzoo, near Ghuznee. Mentioned in Despatches (London Gazette 30 July 1880) he was promoted to Brevet Lieutenant-Colonel ‘in recognition of services during the late Afghan Campaigns, and also in the operations against the Naga Hill Tribes (1879-80)’ (London Gazette 1 March 1881). In March 1885, Nicolson was promoted to full Colonel in the Indian Army, and appointed Commandant of the 30th Bombay Infantry.

Zhob Valley Expedition
Owing to local disturbances in the valleys of the Kundar and Gomal Rivers, the Zhob Field Force, under the command of Major-General Sir George White, V.C., K.C.B., K.C.I.E, mounted an expedition in October 1890 to deal with the Kidarzai and Sherani tribes. With a view to learning as much geography as possible, and to extend British political influence as widely as the opportunities would permit, the march from the Zhob Valley across the hills that form its northern boundary was carried out in three columns. Nicolson was appointed to command No.2 Column of the Field Force, consisting of 2 Guns of No. 7 Mountain Battery, 1 Company of the King’s Own Yorkshire Light Infantry, 1 Troop of the 18th Bengal Lancers, and 2 Companies of the 30th Bombay Infantry. The Column left the Zhob Valley at a point north-east of Shina Khula, and marching via Maidan, Kach, and Barak Shazai, crossed the Khaisor Plain and moved onto Thanishpa, where it met up with the other two columns. Throughout the march Nicolson’s column was escorting the agent to the Governor-General in Baluchistan. After a short halt at Thanishpa to enable supplies to be brought up, Nicolson’s column marched north on the 16th October to Nigungi on the River Kundar, and then onto Appozai, arriving on the 28 October, the day before General White’s column. Whilst General White’s column then pressed on into Kidarzai territory, and successfully dealt with the local tribesmen, Colonel Nicolson’s column was given the job of making a camel road through the main pass from Baluchistan, Chua Khel Dhana: ‘a stupendous defile, bounded by perpendicular rocks rising 3,000 feet on each side of the rift, which in places narrows to a width of only eight feet’, and also the Zao Pass- both works were successfully accomplished under most unfavourable weather conditions. During the two month expedition the two columns marched an aggregate of 1,800 miles, of which 828 miles were over new routes which had never before been followed by a British force. Although no clasp was given to the India General Service Medal for this expedition, Nicolson was again Mentioned in Despatches (London Gazette 19 May 1891).

The following year Nicolson was selected to raise the 24th Baluchistan Regiment on the Quetta frontier, and in June 1891 was appointed Aide-de-Camp to the Queen. Promoted Major-General in November 1894, he was appointed to the Command of the Mhow District in India, April 1895, and achieved his final rank of Lieutenant-General in July 1899. In 1903 Nicolson was appointed Honorary Colonel of the 130th Baluchis. General Nicolson died in Madras on 7 August 1904, aged 61. For much of the latter half of his career he was greatly concerned with the threat posed by the Russian Bear on British India, and was closely involved in the plans to stop a potential Russian advance through Afghanistan. To this end, and supported in his endeavours by Lord Roberts, he travelled extensively through the Frontier country, producing plans and detailed maps, and contributing greatly to the increased knowledge of the local geography.

The Nicolson Cavalry Boot
In 1877 Nicolson designed a Cavalry boot having a gusset on the instep, the object of this being to enable it to be got on and off easily. Owing to the difficulty in getting good patterns made, the pair intended for submission to the Government was not prepared until late in 1878, by which time the outbreak of the Second Afghan War caused the matter to be put on one side as far as submission to the Government was concerned. However, Major Staveley, Commanding D/2 Royal Artillery, approved of them, and had all the boots of his officers altered to the Nicolson pattern before heading into Afghanistan. Nicolson also taught a native bootmaker in Karachi to make or alter boots to this pattern, and several officers had new boots made to this design en route to the front. However, despite the success of the boots in Afghanistan, and a subsequent three month trial at Aldershot, the pattern was not found to be suitable, despite Major Staveley’s opinion that ‘...the boots answer most admirably; they were easy to get on and off, no lacing was required, and they were as weather-tight as any other boots, and I should adopt the same plan again if I was ever going on service.’

Sold with the following related documents &c.: Bestowal Document for the Most Honourable Order of the Bath, C.B., named to Colonel Malcolm Hassels Nicolson, and dated 3 June 1893, in accompanying envelope; Various telegrams to the recipient congratulating him on the award of the C.B.; Papers relating to the Nicolson pattern Riding Boot, designed by the recipient, 1877-78; Copy of ‘Is an Invasion of India by Russia Possible?’, by General Roberts, dated December 1883; Translation of General Kouropatkine’s Plan for a Russian advance on India, dated June 1886; Copy of Notes on the Strategy of the Siege of India, the response to the proposed Russian advance, dated Quetta, December 1887; Memorandum on Afghan Affairs, dated Quetta, April 1887; Two copies of the recipient’s Diary of his travels in Afghanistan and the North West Frontier, May to July 1887; Paper by the recipient entitled Government and Amir of Afghanistan, dated Quetta, October 1887; Various other Papers and documents relating to the possible Russian advance on India, including four sketch maps by the recipient showing the possible routes of any advance; Address printed on silk to the General Officer Commanding, Mhow District, on the occasion of Her Majesty´s Diamond Jubilee; Copy of the recipient’s last Will and Testament, dated 14 June 1903 and related documents, including the Nicolson Settlement Trust Account, dated June 1906; Various letters to the Recipient, including those from the recipient’s parents, and one from Lord Roberts; Various newspaper cuttings of the recipient’s obituary; and two portrait photographs of the recipient.