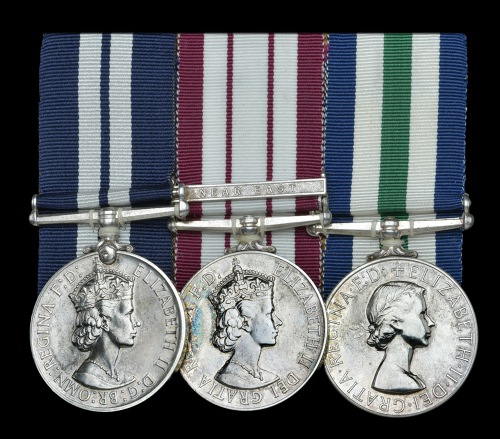 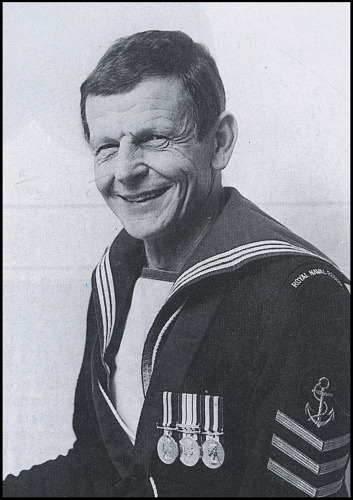 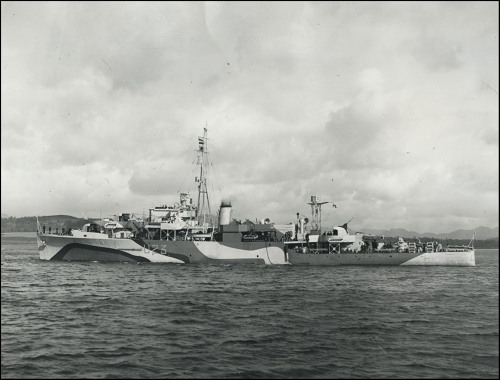 The rare Suez Crisis ‘Operation Toreador’ D.S.M. group of three awarded to Able Seaman R. J. Loader, Royal Navy, a Bofors Gunner aboard the frigate H.M.S. Crane who was decorated for his gallantry as part of Task Force 324 during the ‘blue on blue’ aircraft strike by Mystere jet fighter-bombers of the Israeli Air Force - The first action in which modern swept-wing supersonic jet aircraft had ever attacked a naval vessel and the first time that such an aircraft had been destroyed by naval gunfire - One of only two D.S.M’s awarded for the Suez Operations - The lot accompanied by an audio interview conducted with the recipient

‘For gallantry during the attack by Israeli aircraft on the frigate Crane. Rockets struck around the Bofors gun of which he was aiming number, seriously wounding another rating, severing the power supply and putting a neighbouring gun out of action. With the assistance of another rating, untrained in Bofors gun drill, he kept his gun in action and continued to direct accurate fire throughout the operation.’

Roy Joseph Loader was born in Lincolnshire in December 1936 and enlisted as a boy seaman in 1952. He served aboard a number of ships and shore establishments, before leaving the Royal Navy in November 1963, subsequently settling in Exeter where he worked for the Post Office as a postman, subsequently joining the Postal Branch of the Royal Naval Reserve. He died in October 1989, age 47.

Roy Loader’s medals were previously sold by Sotheby’s in December 1990 as part of the Roger Perkin’s Collection. Included with the lot are two comprehensive articles written by Roger Perkins about the Crane Incident, which draw from a taped interview conducted by the author with the recipient. Copies of both articles and a tape recording of the interview are included with the lot. The following passages are extracted from these sources.

On 16 July 1956, Colonel Gamal Abdel Nasser, head of Egypt's military government, announced to the world that he had nationalised the Suez Canal. This summary seizure of an asset previously owned by the French and British Governments was a direct challenge to Great Britain's long standing leadership in Middle East affairs. As a result Egyptian assets held in France and the United Kingdom were frozen, and all further financial aid to Cairo stopped. The USSR seized the opportunity to increase its flow of money, weapons and technical support to Egypt and other Arab countries. Israel watched with mounting dismay as the Egyptians continued to build up a massive military presence on the Sinai Peninsula, presumably in preparation for an attack into Southern Israel through the Gaza Strip. All of the ingredients for a multinational conflict were coming together in the same area and at the same time.

What is often overlooked by historians is that whilst the Anglo-French force mobilised to attack Port Said, the Royal Navy was fighting a war of its own, five hundred miles to the south, in the Red Sea, where a small but powerful squadron, including H.M.S. Crane, under Captain Pemberton had been sent under the code-name Operation Toreador.

There had been a report that an Egyptian frigate was somewhere up towards Aqaba and it was Crane's task to stop her from breaking out, sinking her if necessary. H.M.S. Crane (F 123) was a modified 1,350 ton Black Swan Class sloop (later re-designated a Frigate) laid down by Denny & Company of Glasgow in June 1941, launched in November 1942 and completed in May 1943. Her length overall was 300 feet, her beam 38.5 feet with a draught of 8.75 feet. Powered by steam turbines driving two shafts, she had a top speed of 20 knots. She was armed with six 4-inch guns in twin mountings and six 40 mm AA Bofors guns.

Roy Loader’s action station was at one of the two 40mm Bofors guns mounted at the ship's stern. On 3rd November Crane was patrolling close inshore, not far from Sharm el Sheik. “It was a beautiful evening, not a cloud in sight". Captain Pemberton cruised into the rapidly narrowing Channel, the sand-brown Tiran Island to the east, the cliffs and dunes of Sinai to the west. He was now very close to the mainland, and the land battle which had been raging all day could be seen in great detail. Shells were bursting amongst groups of lorries while opposing tanks and armoured cars crawled blindly through the banks of smoke and dust. To the men watching from the Crane's upperworks, there could have been no greater contrast between the war fought by the sailor and that fought by the soldier. Circling above the battle were five aircraft. They were seen to swoop low over the cliffs and their bombs exploded near Ras Nusrani.

The Crane was now only three miles from the fight. Clearly the Egyptians were determined to block the Israeli drive southwards for as long as they could. It was at this point that H.M.S. Crane ceased to be a spectator. The aircraft, initially identified as Egyptian MIGs but now seen to be Israeli Air Force Mysteres, climbed to 6,000 feet, turned seaward and dived towards the British ship. "I was number one on the gun and the standing order was that I must fire at anything I believed was a threat to the ship. I didn't need an order from the bridge before I opened up. I could see that they were Mystere fighter-bombers and guessed they were Israeli. But that didn't matter. Once they started to dive down in line astern I pressed the peddle and let fly".

The aircraft were indeed Mysteres of the Israeli Air Force. They too had been alerted to the presence of an Egyptian frigate in the Gulf of Aqaba and, having failed to identify the Crane as a Royal Navy ship, they attacked her as a legitimate target. One after the other, they swept in to launch their salvoes of 2-inch rockets. The rockets missed the central superstructure but burst all over her quarterdeck. Both of the Bofors guns were hit and three of the gunners were struck by splinters of steel. Roy Loader looked around as the aircraft climbed away to the east and saw that he was the only man uninjured. "The rockets had cut through my hydraulics, so I could only train the gun by hand. My Number Two was on the deck, with a lot of little holes in him, and the other gun's crew were also laid flat. My mate was not too badly hurt, but one of the other gunners had a mangled leg. A damage control party came running aft to see what they could do. I shouted to one of the seamen, who was even younger than I was, to give me a hand. He hadn't a clue about Bofors, but I quickly told him how to load the clips of ammo and what I wanted him to do. By the time the aircraft had circled around and were coming in for their second run, we were just about ready for them". The Crane's formidable armament did not deter the pilots from now strafing the ship with cannon fire. The White Ensign had been hoisted and there was a Union flag painted prominently on the forecastle deck but, coming in low at 500 knots, the Israelis were obviously convinced that they were attacking the Rashid.

Again they were deceived by the speed of the ship and the streams of cannon shells nearly all missed their target. Only two shells struck, causing insignificant damage. Captain Pemberton was heading rapidly to the south east, hoping to hide his ship in the gloom of approaching night. Once again the five Mysteres formed line ahead and swooped down on the Crane's starboard side from 6,000 feet. This time they released clusters of small bombs which burst all around the ship's stern. Spray from the explosions drenched Roy and his new Number Two, but again they succeeded in firing several bursts. The rocket attack had inflicted widespread damage on the frigate's hull, destroyed a depth-charge thrower, and cut various electrical circuits and water mains. Splinters had sprayed over the decks, and some even fell on the compass platform, but none of the damage was serious. Her fighting efficiency was only slightly impaired and she continued away from the coast at 17 knots into the protection of full darkness.

Damage to the attacking aircraft is less easy to quantify. During the second attack, one of the Mysteres was seen to be hit and emit smoke. It is believed that this aircraft subsequently caught fire while returning to its base in southern Israel. The pilot, Major Benny Peled, baled out over the Sinai desert and, although injured when landing, managed to evade capture by the Egyptian soldiers who had seen his parachute descent. He hid in the dunes until, some hours later, the pilot of a Piper light "search and rescue" aircraft found him. Its pilot daringly came down within 500 yards of an Egyptian encampment and Peled was whisked away to safety. When the Mysteres made their third run over the Crane, dropping bombs, one of their number took a direct hit. Shedding pieces of airframe, it was seen to fall ahead of the Crane and crash into the sea. Shortly afterwards the ship passed a column of flame and oily smoke rising from a patch of burning fuel. Captain Pemberton claimed this one as "definitely destroyed". The Israeli Air Force has subsequently declined to confirm or deny that any of its aircraft were hit or lost during the attack. Unofficially, one of its senior officers has since stated that the second Mystere did indeed fall into the sea but its pilot managed to eject and paddle his way ashore in a rubber dinghy.

The incident was remarkable in several ways. That day, 3rd November 1956, witnessed the first occasion when a British naval ship had been attacked by modern swept-wing supersonic jet aircraft. It was the first time that such aircraft were shot down by naval gunfire. And it was almost certainly the first when a Royal Navy gunner was decorated for having shot down a "friendly" aircraft of any kind. Much to his surprise, Roy Loader was recommended for the award of the Distinguished Service Medal. It was one of only two such awards resulting from the Suez war, the other D.S.M. being awarded to a Leading Seaman aboard HMS Newfoundland, both for Operation Toreador.

i. Royal Navy Certificate of Service.

iii. Notification from the Central Chancery to attend investiture at Buckingham Palace on 19 November 1957.

iv. Admiralty charts showing the location of the engagement.