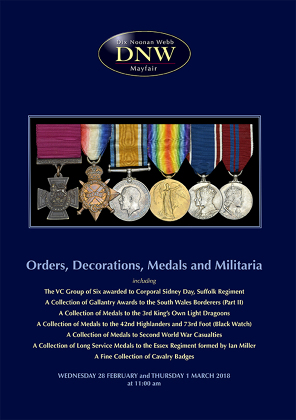 Saleroom Notices
The following were amendments to the printed catalogue descriptions:
4. The recipient’s name is Bugden and all medals are named thus
118. Sold together with the recipient’s Soldier’s New Testament South Africa 1900, the inside cover inscribed to the recipient as part of ‘E’ Company, 1st Bn, and dated 20 August 1900
531. The Rhodesia General Service Medal is named (Asst. Commr. E.I. McKay)
553. The large Eagle badge is a collar badge; the Eagle and Scroll badge is an other ranks cap badge with an incorrect bronzed finish
555. The badge described as a cypher is part only of an other ranks Victorian period pouch badge
557. This is a genuine cap badge with original slider fastener. The photograph referred to is of RSM F.A. Dolby
558. The arm badge is probably a collar badge
559. One of the shoulder titles listed does not pertain to the regiment quoted
650. The blue tunic described as Foreign Legion c. 1914 is earlier and from a different unit, with Foreign Legion buttons added, possibly for theatrical purposes
1049. The medal is named to F. Warr
1094. The lot includes the recipient’s King’s South Africa medal
1116. The King’s South Africa medal in the lot has been withdrawn
1224. The clasp is Near East, not Malaya

Withdrawn Lots
The following lots were withdrawn before the auction:
113, 824 and 893