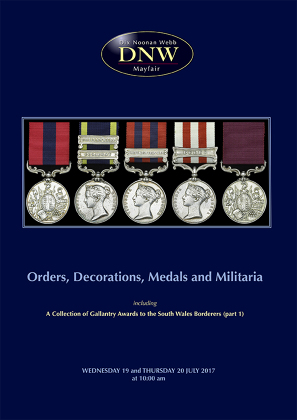 Saleroom Notices
The following were amendments to the printed catalogue descriptions
194. Two medals in the lot, as described
241. The first three medals are named to the 4th Dragoon Guards
368. The last two medals have been withdrawn; 6 pieces in the lot
1235. This accords with the specification of the pre-1912 pattern first type badge. Weight without ribbon 38.80g, buckle 7.57g
1237. This is a first typ,e 2nd class award
1239. This is a first type, 3rd class badge
1534. Believed to be more likely a portrait of Lt Neville Custance, who joined the 7th Husars from the 23rd Royal Welch Fusiliers in April 1815. He was not present at Waterloo and went on half-pay in 1818

Withdrawn Lots
The following lot was withdrawn before the auction:
1217