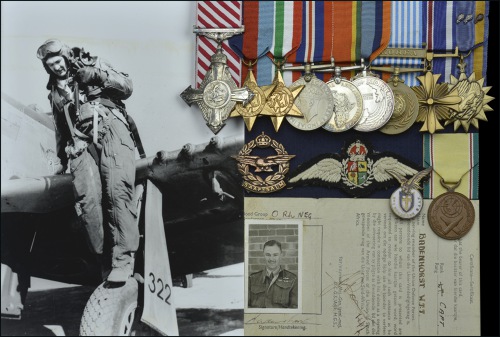 A rare and outstanding 1946 A.F.C., Korean War U.S. D.F.C. and Air Medal with 3 Oak Leaf Clusters group of ten awarded to Captain W. J. J. “Badie” Badenhorst, South African Air Force. A Spitfire Pilot during the Second War, he served as a Flight Commander with 2 (Cheetah) Squadron during the Korean War, 1950-53. He led his Mustang flight on at least 53 operational sorties, personally accounting for a number of enemy vehicles and troops, before he was killed in action leading a raid, 2 March 1951

‘This Officer has completed an Operational Tour and has, in addition, carried out 1470 hours as a Flying Instructor, 110 of which have been done during the last six months. He has completed over 2,200 hours Service Flying.

He is a most efficient and conscientious Flight Commander. His flying and instruction is of a high order and his assessment of pupils ability very sound.’

‘Captain Wessel J. J. Badenhorst distinguished himself by extraordinary achievement while participating in aerial flight on 17 December 1950. Leading a flight of two (2) F-51 type aircraft on a Combat Area Patrol mission in the Sinanju area, Captain Badenhorst located by protracted and extremely diligent study of features a concentration of cunningly concealed enemy vehicles camouflaged in a deep and narrow valley. The position of the target reduced manoeuvrability to a minimum, but Captain Badenhorst without hesitation made successive hazardous attacks through a screen of enemy machine gun fire. The violence of the explosion of one of the enemy vehicles attacked by him caused severe damage to his aircraft. He, however, oblivious to personal safety continued the attack to such effect that he was credited with eight (8) enemy vehicles destroyed. By his high personal courage and devotion to duty Captain Badenhorst has brought great credit upon himself, his Unit and the South African Air Force.’

‘Captain Wessel Jacobus Johannes Badenhorst did distinguish himself by meritorious achievement while participating in serial flights against North Korean invaders. By successfully completing numerous combat missions in F-51 type fighter aircraft from 19 November 1950 to 30 November 1950 he greatly enhanced the efforts of the United Nations Forces. Captain Badenhorst, flying at extremely low altitudes, did strafe, rocket, and bomb enemy troops, artillery, armament, and other war material. During these flights he was in constant danger from enemy aircraft, ground fire, and artillery. By his display of aeronautical skill and intrepid aggressiveness, Captain Badenhorst proved to be a credit to himself and the United States Air Force. His actions are in keeping with the high tradition of the South African Air Force.’

Wessel Jacobus Johannes Badenhorst was born in August 1919, and joined the South African Air Force in January 1941. He was posted as a Second Lieutenant to 62 Air School, Bloemfontein, 25 January 1941. He undertook various postings in South Africa, including as a Flying Instructor, before being posted as a Pilot for operational flying with 3 Squadron S.A.A.F. (Spitfires) from 24 March 1944. Badenhorst carried out an operational tour with the squadron in Italy, before being posted to 12 Tactical Command in April 1945. He was promoted Captain, 1 April 1943, and posted to 22 Air School in July 1945.

Badenhorst accompanied 2 (Cheetah) Squadron to Korea as one of the original contingent of 49 officers and 157 men, leaving Durban on 27 September 1950. They arrived at Yokahama on 5 November, from where they were transferred to Johnson Air Base near Tokyo where, for the next ten days, the squadron was kept busy converting to F-51 Mustangs. When the squadron arrived in Korea they were attached to the 18th Fighter-Bomber Wing of the U.S. Air Force.

Between 19 November 1950 - 30 January 1951, Badenhorst completed 53 combat missions, primarily in close support, but also including day and night reconnaissance, and patrol and escort missions. He accounted for a large number of enemy vehicles, and troops on the ground. His luck ran out when:

The flight led by Capt. Badenhorst took off from K.10 at 10.20 hours on 2/3/51 and proceeded as briefed. At approximately 11.15 hours Lt. Richter returned due to engine trouble and I took over No. 3 position in the formation with Lt. Ansell taking over No. 2 position.

At approximately 12.05 hours whilst flying over the chong-Ch’on-gang river just North of Sinanju between 500-1,000 feet Capt. Badenhorst called up and said, “Look out there is bags of heavy Ack....” he broke off and turned sharply right over the bridge crossing the river. At the same time he appeared to lose height and black smoke appeared from the aircraft. At this time I noticed what appeared to be 20mm, 40mm and some black puffs of anti-aircraft fire.

I called Capt. Badenhorst and told him he was streaming black smoke and to turn South and that we would follow him. There was no reply but the aircraft turned towards the South alternatively losing and gaining height slowly. I then noticed white smoke as well as black coming from the aircraft and informed Capt. Badenhorst again telling him to head South. Once again there was no reply. I then called Capt, Badenhorst and asked him whether he could read me. He did not reply but the aircraft kept on turning through south and appeared out of control as it was alternatively losing and gaining height.

The aircraft kept turning straight back towards Sinanju and at 12.10 hours at a height of approximately 700 feet flick rolled twice over the town and then dove straight into the ground in the Sinanju area. On impact the aircraft exploded and burnt furiously. At no time was anybody seen to attempt to bail out of the aircraft or anything fall away from the aircraft.’ (Eyewitness Account of incident refers)

‘It is impossible for me to find words to express the innermost feelings of myself and the members of the squadron in this sad hour. Badie being reported missing on operations came as a great shock to us all, and we fully realise what a terrible blow it must be to you. I can assure you Bobbie, that you and the children are constantly in our thoughts...

Badies place on the Squadron can never be filled. No squadron can ever have had a more able, reliable and likeable Flight commander than Badie. In his quiet unassuming way he was an outstanding leader of men.... In many little ways he so endeared himself that he soon became the staunchest of friends and companions. It goes without saying that his absence from our midst is deeply felt by everybody and I miss a very great personal friend.’