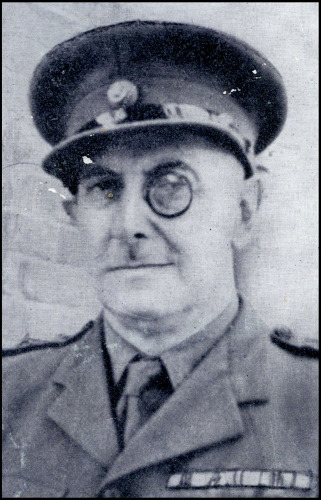 ‘For conspicuous gallantry and devotion to duty. This officer was in command of a raiding party that penetrated the enemy’s first line and support trench with great success, doing much damage, causing many casualties, and capturing four prisoners and a machine-gun. All our wounded were brought back, and Captain Fryer, who was carrying one of them, was the last to leave the enemy’s line. The complete success of this raid was largely due to the very careful manner in which he had previously trained his party and the fine courage and ability with which he led his men.’

Lieutenant-Colonel Fryer was born in 1888, the son of and Mrs. C. Fryer. On leaving Nottingham High School he went to South Africa, where he was farming when the 1914-18 War broke out. He was soon home, and enlisted in the Regiment and joined the 6th Battalion. He was soon granted a commission, and found himself in France with the 2nd Battalion in 1915. He was wounded in the Battle of Loos. Convalescing at home, he joined the Royal Flying Corps, but in course of training was crashed by another pilot and injured. He rejoined the 2nd Battalion in France and by 1918 was a highly efficient Company Commander. He carried out a very successful raid with his Company in front of Noeux les Mines and received the M.C. for his gallantry on that occasion. After this he became Adjutant of the Battalion, and in that capacity was with the Battalion in all the fighting which led to the Armistice. He particularly distinguished himself on 4th November 1918, when doing a personal reconnaissance for his commanding officer. He and his orderly, Rifleman Procter, a fine member of the Rhodesian platoon, completely eliminated an enemy post which tried to hold them up. For this and his other services he received a Bar to his M.C.

After the Armistice he volunteered for service in India, where he became Adjutant of an Indian battalion. He went to Mesopotamia, where he was on the H.Q. Staff during the Arab rebellion. He then volunteered as an instructor to the Persian army, and for his services there received a Persian decoration.

Many first-class temporary officers joined the Regiment 1914-18, but none had a greater love for the Regiment or absorbed its traditions better than Fryer. He made a great success as Adjutant of the 2nd Battalion and his Commanding Officer placed absolute confidence in him.

After the Armistice Captain Fryer returned to civil life and lived at East Fulham, where he became a Borough Councillor and Private Secretary to Sir K. Vaughan-Morgan, M.P., and took an active part in local affairs. Early in 1939 he became Adjutant of the 2nd Battalion, Queen Victoria's Rifles when that Battalion was raised, and when war started he became Adjutant to the Training Battalion. In January 1941 he was appointed Staff Captain at Southampton. The following June he was A.D.C. to Lieutenant-General Easrwood at Northern Command. After two other Staff appointments he joined the Paratroops in May 1942 and became an instructor in glider pilot training, and was promoted Lieutenant-Colonel. In 1943 he was Second in Command of the Parachute Battalion Depot for nine months, but in November that year he returned to command his former Glider Pilot Section. He then applied for a Pilot Flying Course to completely fit himself for his job. At the age of 56 this was a considerable achievement, and he was on the point of attaining his desire when a crash landing ended his life.’

An accompanying medal roll extract in respect of the recipient’s General Service Medal 1918-62, confirms his entitlement to the ‘Iraq’ clasp for services as a Captain in the 2nd Battalion, 119th Infantry, I.A., while his MIC reveals that the same award was returned to the issuing authority in May 1925; so, too that he was entitled to emblems in respect of a mention in despatches.

Sold with the recipient’s original Army Council condolence slip in the name of ‘Major C. R. Fryer’, complete with original addressed card forwarding. The former notes entitlement to two campaign awards, and given Fryer does not appear to have gone overseas, these would have been the Defence and War Medals - the addition of the above described 1939-45 Star therefore remains unverified.

Also sold with a file of research and a copy of The King’s Royal Rifle Corps Chronicle, 1944, in which appears the above cited obituary notice.

Papers in respect of the recipient’s military career are held in the Liddell Hart Centre for Military Archives at King’s College, London.