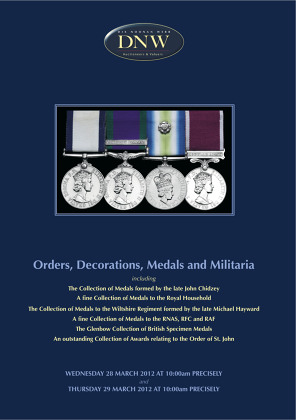 
Saleroom Notices
The following were amendments to the catalogue descriptions
18 The recipient was wounded at Badajoz and Vittoria, not at Waterloo
33 The Illustrated London News of 12th December 1842 carried the following account of the casualties incurred in this action: ‘Our casualties were numerous, two men being killed and twenty-five being wounded, but confined entirely to the naval arm of the expedition. The enemy are said to have lost about eighty killed and a proportionate number wounded. They served their guns extremely well, and some of the vessels (particularly her Majesty’s ship Blonde and the steamers Nemesis and Sesostris) suffered a great deal from the heavy destructive fire. The Nemesis’ rigging was cut to pieces; an artilleryman belonging to her was obliged to have his right arm amputated at the shoulder joint, another man belonging to the Pluto lost both his legs at the ankle, and Lt. Hewett R.M. of her Majesty’s ship Blonde lost his head by a round shot... Medals to Royal Marine recipients do not normally carry the ship’s name on the edge. However, this is one of at least two medals known to Royal Marine casualties issued with the ship’s name on the edge, both probably prepared and issued from the Royal Navy rolls rather than the Marine rolls. It is of further interest to note that Hewett’s ‘Marine’ issued medal is held by the Royal Marine Museum, having been part of a collection presented to the Royal Marines by Captain Portloch-Dadson, to commemorate his appointment as a Gentleman-Cadet on 6th August 1849.
171 Sold with original letter from the High Commission of India dated March 1963 which confirms that the recipient was killed at Chitral
200 The naming is officially re-impressed
332 The recipient was not entitled to the Talana clasp
819 The Swedish Royal Household Medal is silver-gilt, not gold
878 Allegedly only 3 medals with these clasps to the regiment
975 The Danish Medal for International Service is a copy with ‘Saudi Arabien 1991’ engraved
1293 All medals named to Conlan except KSA which is named ‘Conlon’
1308 The lot also includes his India GS 1895-1902 medal, catalogued as Lot 181
1330 The lot also includes his Queen's Sudan and Khedive's Sudan pair, catalogued as Lot 1290
1419 The lot also includes his QSA and KSA pair, catalogued as Lot 1339 1527 The pair to Pte A. Roskell is included with Lot 1774. ^ medals in total
1570 The last two medals have been erased and renumbered
1703 Part of the sale proceeds will go towards the publication of Commander Stephens’ wartime memoirs. The original manuscript is currently held by the Imperial War Museum though copyright remains with the vendor
1713 The recipient was awarded a LS & GC medal and £5 gratuity in April 1855
1774 The lot also includes his BWM and Victory medal, catalogued within Lot 1774 The following lots were withdrawn before the auction:
22, 24, 181, 538, 718, 719, 720, 733, 1286, 1290, 1339, 1730 Return to Auction Information