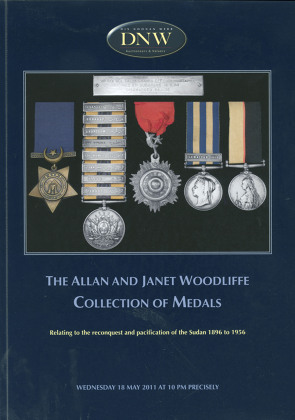 
Saleroom Notices
The following were amendments to the catalogue descriptions
Lot no.
62 The 1914-15 Star is a late issue and the British War and Victory Medals renamed
74 The M.C. is a Western Front award, possibly for the third battle of Ypres, September-October 1917
75 The British War and Victory Medals have been officially re-impressed
211 Provenance: Sir Torquil Matheson Collection
232 Sold with an original copy of the recipient's 1870 Saarbruck to Paris
247 The recipient is confirmed as serving in 'D' Company
253 The regimental number is 1252. A second Partab Singh (regimental number 1804) was also in the defence; both men were wounded but only 1252 Partab Singh received the I.O.M.
281 Research with the lot suggests the recipient was entitled to the clasp Burma 1930-32 rather than the one fitted
302 The recipient was born in 1929
325 The copied photograph shows the recipient in uniform with shoulder title of the South Nottinghamshire Hussars
350 The footnote should refer to Stanley Arthur Adams
356 Sold with the loose clasps for Malay Peninsula and South Arabia to which the recipient is entitled
361 The recipient was seconded to the South Arabian Army in Aden until independence in 1967
371 The recipient served in 1/Para at the time of Bloody Sunday
374 The recipient was killed in action on 26 May 1967
382 The Northern Ireland clasp is also confirmed
415 The recipient died of wounds at Nijmegen on 4 October 1944
420 The recipient was wounded at Suez on 12 July 1941
421 The recipient was serving in the 53rd (Welsh) Division when wounded at s'Hertogenbosch
537 Provenance: Sir Torquil Mattheson Collection
571 HMS Furious was not torpedoed during the course of Operation Pedestal
696 The book mentioned in the last line of the footnote is not sold with the lot
711 The recipient was also entitled to the 1914-15 Star as a Sub-Lt, R.N.R.
738 Sold with a copy of the book
Lion by the Tail, by T.M. Coffey
756 Sold with a copy of the book Commando Force 133
760 There is no case with the lot

The following lot was withdrawn before the auction:
345 Return to Auction Information