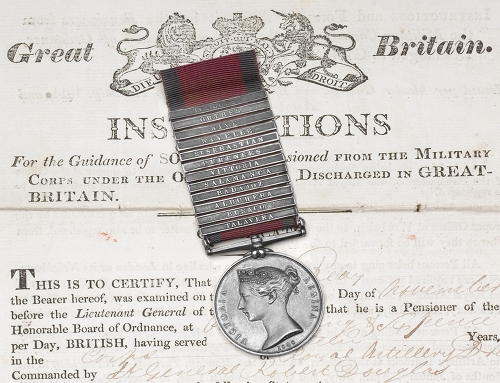 The published M.G.S. roll records, ‘A Dvr Jn. Rey on Waterloo Roll of A Tp HA’. Service at Waterloo is not recorded in his service papers but in a hand-written reference given by Major Fyldon, R.E., 13 October 1815, he writes that ‘Sergt. John Wreay Corps of R.A. Drivers has served with the Pontoon Train under my command since the month of May 1815 during which time he has conducted himself perfectly to my satisfaction, particularly when in charge of Dutch Drivers, where he showed himself to be an active, steady & intelligent N.C. Officer.’

Sold with original (repaired) Service Certificate and Discharge Certificate - on both he is referred to as ‘John Reay’ but on the former he signs himself ‘John Wreay’. Also with a hand-written ‘Memoranda of the Services of Serjt. John Wray, R.A. Driver’, dated Woolwich, 12th Novr. 1818. - listing his services and commanding officers in the Peninsula and France; together with seven other hand-written references of Serjeant Reay’s service given by various officers (his name variously spelt).