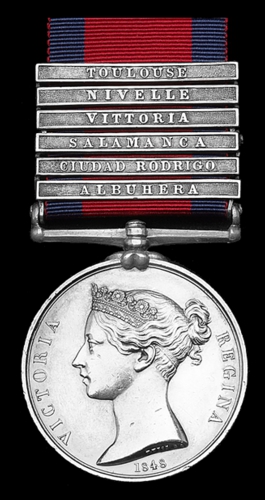 John Finnagan, a labourer from Folksmill, Cork, enlisted in the Waggon Train in October 1808, having previously served in the Commissariat for six years. Having then been present at Albuhera, Ciudad Rodrigo, Salamanca, Vittoria, Nivelle and Toulouse, he was discharged in August 1814, in consequence of ‘a reduction of part of the Corps and likewise having lost an eye from an accident on board a transport while escorting French prisoners from the Peninsula to England in the year 1812’ - a marginal note by Surgeon John Jackson, ‘in charge of sick, Royal Waggon Train’, refers. Awarded a pension of one shilling a day, Finnagan’s application for an increase in 1851 was turned down, and he was still living in Tralee in 1854.

Apart from the military side of the Peninsular army, there were seven civil departments, of which the most important was the Commissariat, whose function was to maintain supplies to Wellington’s small army to allow it to remain concentrated. Although frequently reviled, the Commissariat rose to the challenge, unlike the French, who, living off the country, were inevitably forced to disperse to find food. Thus Wellington could hold his army together; the French could not. This was the key to the War.

‘The British waggons sent out to the Peninsula turned out to be quite useless for Portuguese by-roads. Wellington finally gave up all idea of relying on them for load carrying, and mainly employed them for his sick and wounded. A few of the “spring waggons” (as they were called to distinguish them from the springless Portuguese vehicles) were attached to each brigade for the carriage of invalids, and the Royal Waggon Train in the later years of the war seem to have been treated as an ambulance corps’ (Sir Charles Oman, Wellington’s Army, refers).

With copied discharge papers, roll extract and other research.