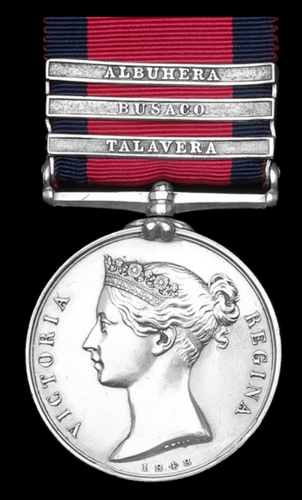 Nanty Barrett, who is believed to have been born in Dry Sandford, a village near Abingdon, enlisted in the 66th Foot in September 1803 and was posted to the 2nd Battalion in January 1804.

The 2/66th arrived in the Peninsula in April 1809 - with a strength of some 770 men - and went into action in the following month at the successful crossing of the Douro at Oporto, where the Battalion sustained 38 casualties, which, though a small number, was the highest of all the units involved.

Much harder fighting was experienced at Talavera on 28 July, when 16 men were killed and 99 officers and men wounded, although at Busaco, on the right flank, the 66th saw little fighting, and afterwards withdrew with the rest of the Army into the Lines of Torres Vedras. In 1811, however, the Battalion was in Marshal Beresford’s force laying siege to Badjaoz, the advance of an army under Soult forcing him to abandon this operation and move away to the south to await his adversary’s arrival.

And when the two armies met at Albuhera on 16 May 1811, the 2/66th (24 officers and 417 men), formed part of Colborne’s Brigade, soon destined to suffer the worst catastrophe of the Peninsula War, at least as far as the British Army were concerned. As they were hastily advancing towards the firing line, a tremendous rainstorm broke, making muskets unusable, and this, together with the gunsmoke, concealed the approach of a strong force of French cavalry with a large component of Polish lancers, hitherto unknown in the West. They immediately attacked and with the exception of the 2/31st, who just had time to form square, virtually annihilated Colborne’s men. The 66th lost both their Colours and 272 men out of 441- a signal catastrophe indeed - as a result of which the survivors were afterwards combined with those of the 31st into the First Provisional Battalion.

Nanty Barrett, like 100 or so others of his Battalion, was taken prisoner during this cavalry attack, being listed, firstly, as “missing” from 16 May, and then as ‘A Prisoner of War’ (WO 12/7533 refers). The 2/66th’s casualty return for April & May 1811 lists him as having been a Corporal in Captain Goldie’s Grenadier Company and that he was entitled to prize money for the recapture of Oporto on 16 May 1809 (WO 25/1967 refers).

Barrett next appears in the regimental musters as a Corporal at the 66th’s depot at Grouville, Jersey, in May 1814 - ‘From 2nd Bn. from French prison’ (WO 12/7534 refers) - having been repatriated that month aboard the Surly (ADM 103/480), after exactly three years in captivity, most probably in one of the French N.E. frontier fortresses, a long and unpleasant march from Spain.

There is one man with this unusual forename, almost certainly this old soldier, recorded in the Berkshire 1851 and 1861 censuses. In the first he is listed as living at 116 Church Yard, Abingdon, aged 66 years, a widower and formerly a miner, the latter profession actually tying-up with that listed in musters of the 66th; while by 1861 he is recorded as living at the Old Almshouses in Abingdon, aged 76 years, an ‘Almsman formerly Agricultural Labourer’, so, too, as having been born at Dry Sandford, a village some two miles north of Abingdon.