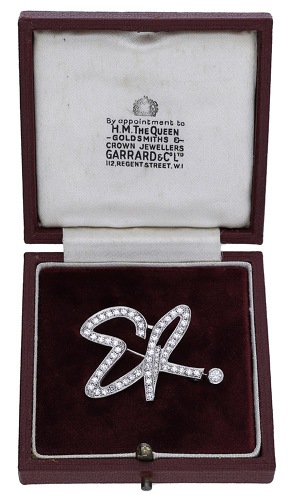 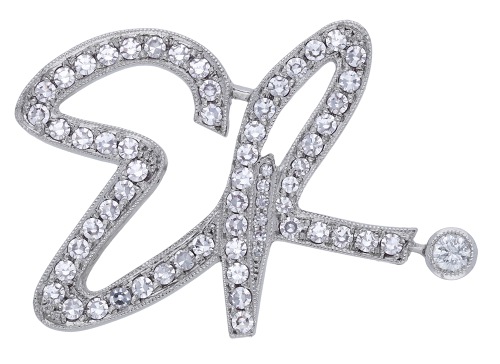 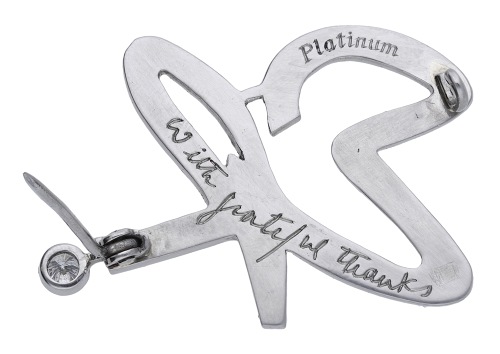 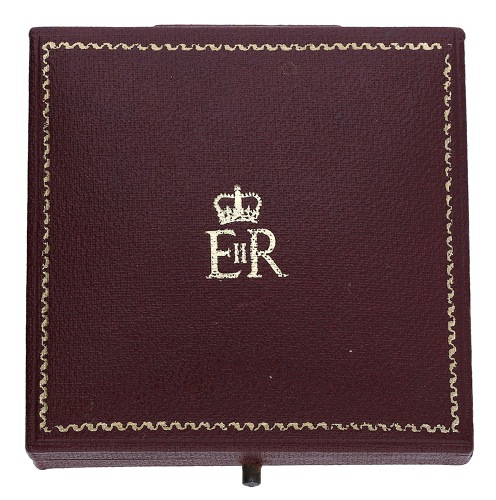 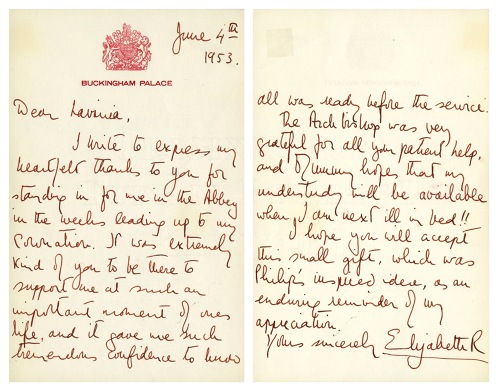 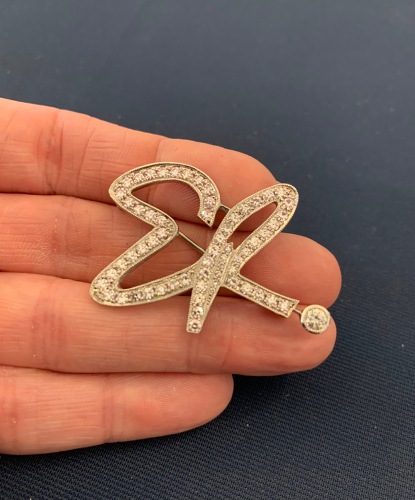 Formerly the Property of Lavinia, Duchess of Norfolk

A Royal Presentation diamond brooch by Garrard & Co. Ltd., 1953, modelled as the facsimile initials ‘ER’ for Her Majesty Queen Elizabeth II, followed by a full stop, the initials modelled in the Queen’s handwriting, set throughout with single-cut diamonds, the full stop set with a brilliant-cut, within closed back millegrain-edged setting, the reverse engraved ‘Platinum’, and in facsimile script ‘With grateful thanks’, contained in a Garrard & Co. Ltd. red leather case, the Royal cypher in gilt to the hinged lid, total diamond weight approximately 1.5 carats, dimensions 27.5 x 39.5cm.

Accompanied by a handwritten double-sided letter from Her Majesty the Queen addressed to Lavinia, Duchess of Norfolk, on headed stationery from Buckingham Palace and dated 4th June 1953, (two days after the Coronation),reading:

I write to express my heartfelt thanks to you for standing in for me in the Abbey in the weeks leading up to my coronation. It was extremely kind of you to be there to support me at such an important moment of ones life, and it gave me such tremendous confidence to know all was ready before the service. The Archbishop was very grateful for all your patient help and Mummy hopes that my understudy will be available when I am next ill in bed!!

I hope you will accept this small gift, which was Philip’s inspired idea, as an enduring reminder of my appreciation.

Provenance:
This brooch was given by Her Majesty Queen Elizabeth II to Lavinia Fitzalan-Howard, Duchess of Norfolk (1916-1995) in June 1953.

The Duchess stood in for the Queen during the rehearsals held at Westminster Abbey in the lead up to the Queen's Coronation on 2 June 1953. The photograph depicts the Queen and the Duchess of Norfolk leaving Westminster Abbey together after one of the rehearsals in May 1953. As Earl Marshal of England, the Duchess of Norfolk’s husband, Bernard Fitzalan-Howard, 16th Duke of Norfolk, had overall responsibility for the organisation of the Coronation, and indeed he had previously planned the Coronation of King George VI in 1937.

Six other matching diamond brooches were made by Garrard & Co. Ltd., and were given as gifts by Her Majesty to her six Maids of Honour who attended her at the Coronation. The recipients were: Lady Jane Vane-Tempest-Stewart, Lady Anne Coke (later Lady Anne Glenconner), Lady Moyra Hamilton, Lady Mary Baillie-Hamilton, Lady Jane Heathcote-Drummond-Willoughby and Lady Rosemary Spencer-Churchill who, together with the Duchess of Devonshire, assisted the Queen with the Robe of State, a 5.5m long hand woven silk velvet cloak lined with Canadian ermine, attached to the shoulders of the Queen’s coronation gown, designed by Norman Hartnell.

One of these six presentation brooches, the example given to Lady Anne Glenconner (née Coke), was displayed at her ancestral home Holkham, in North Norfolk, in 2012, at an exhibition entitled ‘The Ostrich & the Crown’, the exhibition celebrating Holkham’s history from 1612 to 2012 and the Coke family’s association with the Crown over 400 years. This exhibition was staged to mark the Queen’s Diamond Jubilee.

Lady Glenconner wore her diamond brooch pinned to her hat at the Service of Thanksgiving at Westminster Abbey on 4 June 2013, held to mark sixty years since the Queen’s Coronation. Lady Moyra Campbell (née Hamilton) and Lady Mary Russell (née Baillie-Hamilton), also wore their brooches to the Thanksgiving Service.

The brooch offered here for sale was donated by the Duchess of Norfolk in 1956 to be sold for the benefit of the British and Foreign Bible Society. It was purchased by a relative of the present vendor, and thence by family descent.