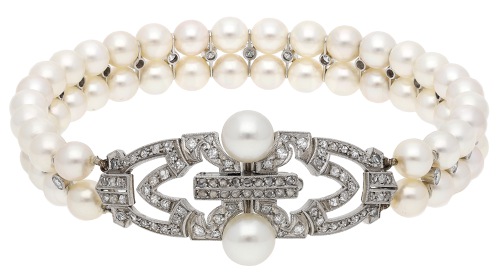 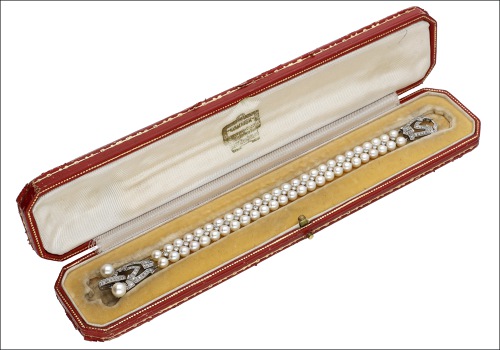 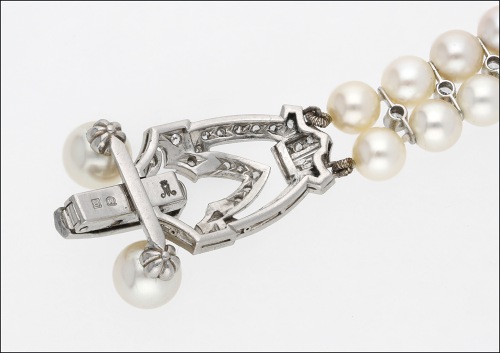 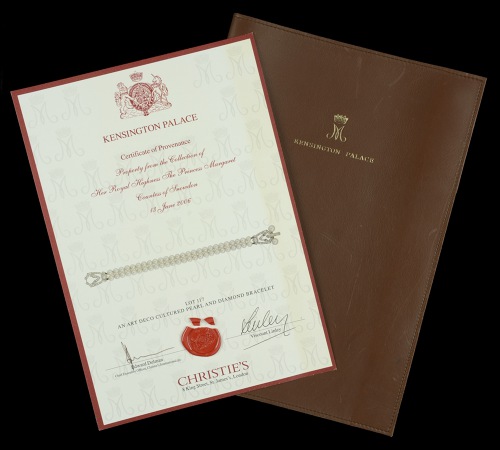 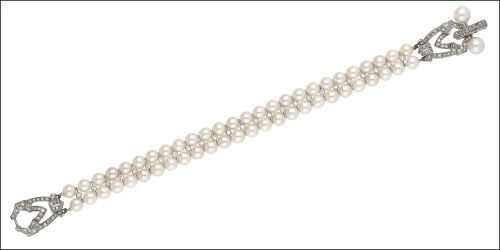 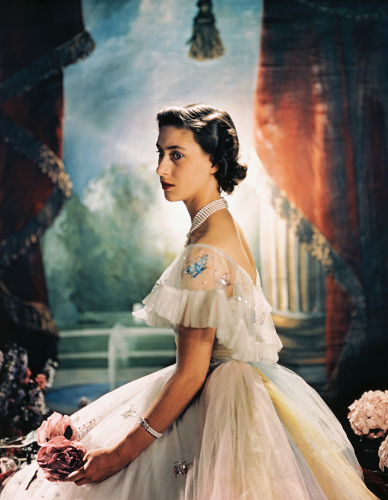 Formerly from the Collection of Her Royal Highness, The Princess Margaret, Countess of Snowdon:

An Art Deco cultured pearl and diamond bracelet, circa 1925, the double strand of cultured pearls highlighted by a millegrain-set row of brilliant-cut diamonds, to a cultured pearl and diamond-set shield-shaped clasp of openwork geometric design, millegrain edged, mounted in platinum, the clasp engraved with the ownership mark ‘M’ beneath The Princess Margaret’s coronet, further stamped ‘M’ for Mikimoto and ‘P’ for platinum, later fitted case by Cartier, length 17.8cm.

Accompanied by the Certificate of Provenance from Kensington Palace, dated 13 June 2006, in original embossed leather folder, and a copy of the Christie’s sale catalogue: Property from the Collection of Her Royal Highness, The Princess Margaret, Countess of Snowdon, Volume I: Jewellery and Fabergé, 13 June 2006.

Provenance: Lot 117, Christie's, Property From the Collection of Her Royal Highness The Princess Margaret, Countess of Snowdon, sale held on 13 June 2006, London.

Sir Cecil Beaton (1904-1980) photographed the British Royal family throughout the mid 20th century. His works display the beauty and splendour historically associated with royal portraiture whilst also enabling a greater sense of intimacy between the sitter and the public. Princess Margaret’s official 19th birthday portrait, (see example at www.dnw.co.uk) was taken on 8 July 1949 at Buckingham Palace and shows the Princess wearing a fairytale-style tulle gown decorated with sequinned butterflies, by Sir Norman Hartnell. The photograph was published on her birthday, 21 August. The two jewels worn in the portrait are an Art Deco five-strand natural pearl necklace and the Art Deco cultured pearl and diamond bracelet, lot 252 in this sale. The pearl necklace was gifted to the Princess by her grandmother H.M. Queen Mary the previous year for her 18th birthday, along with a pearl and diamond bracelet. Several versions of this photograph exist example at showing the different compositions used during the sitting and also displaying the bracelet at various angles.

The bracelet is in overall very good condition. The pearls are creamy white, some with pinkish undertones, of high lustre, minimal surface imperfections, the two pearls to clasp of approximately 6mm diameter, 52 smaller pearls to bracelet approximately 4.8mm diameter. The clasp is set with single-cut and rose-cut diamonds, none missing. The central line of brilliant-cut highlights are lively with good scintillation. Contained in fitted Cartier case. The bracelet appears to have been shortened at some point, prior to its inclusion in the Christie’s auction of 2016, the length printed in the Christie’s catalogue being consistent with its current length.

Cartier box: Exterior is generally heavily scuffed throughout, with losses to the gilt tooling, and splashes of white paint to the lid.
Interior with some fraying to the silk lining, small biro pen line mark to the inside lid, general dirt and some discolouration evident to the fitted cream velvet section.

The printed Christie’s catalogue (Volume 1 only) with some general wear to cover and internal pages.