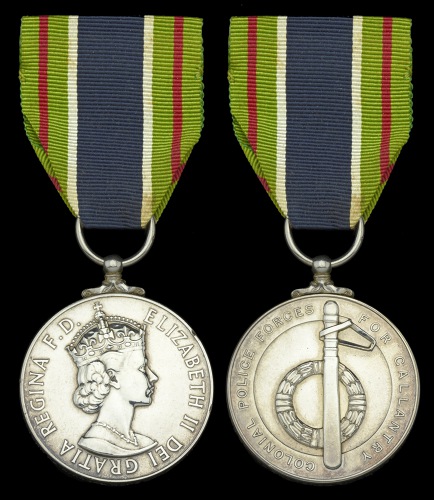 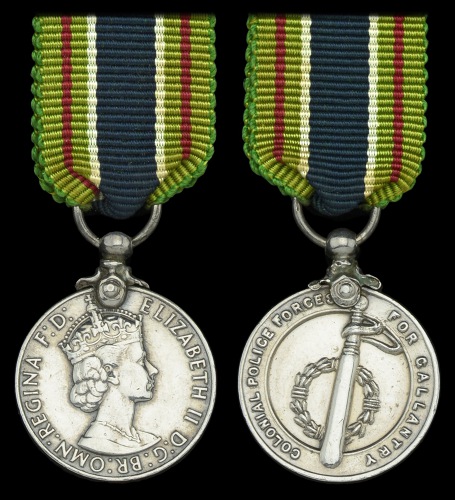 A scarce Colonial Police Medal for Gallantry awarded to Inspector John Reid, Royal Hong Kong Police Force, for the apprehension of an armed and dangerous fugitive in Wanchai in February 1973

‘The Queen has been pleased to approve the award of the Colonial Police Medal for Gallantry to Inspector David Wilfred Frederick O’Brien and Inspector John Reid of the Royal Hong Kong Police Force.

These officers joined the Royal Hong Kong Police Force on 3rd August 1972, completed 6 months’ training at the Police Training School and passed out on 27th January 1973. As a final part of their training, probationary inspectors join a Continuation Training Course which is intended to familiarise them with various practical aspects of police work in all parts of the Colony.

At about 0058 hours on 16th February 1973, when all the members of the course, in plain clothes and unarmed, were in Wanchi (sic) Division with the object of visiting and checking known haunts of bad characters, the party entered the Golden Ball Billiard Saloon, 52 Jaffe Road, 3rd Floor.

As they conducted a search of the persons, Mak Wing-fai, aged 19 years, dashed out of the side door immediately pursued by Inspectors O’Brien and Reid. At street level Mak fired one shot at the officers which passed Mr O’Brien’s shoulder. The chase resumed and after a few yards Mak again turned and fired a second shot at Mr O’Brien who felt something hit him in the left chest. The pursuit continued until the next road junction where Mak fired a third shot at Mr O’Brien but missed.

Mr O’Brien then jumped on Mak and they struggled. Mr Reid rushed across the road and grabbed and seized Mak’s right hand, in which the gun was held, pointing at Mr O’Brien’s head, and forced Mak to release the gun. All three fell to the ground where Mak slashed Mr Reid’s left hand with his knife. The struggle went on until they were assisted by a uniformed Police Constable.

Both Inspectors whilst unarmed showed the highest degree of courage in tackling and arresting an armed and dangerous man, in complete disregard for their own safety. These officers displayed bravery and initiative of a very high order.’

Sold with letters of congratulation from the Governor, Murray MacLehose, and the Chief Superintendent of Police Training; original edition of the London Gazette; photograph of the Governor making presentation to Reid, and others relating to his police work; invitation to a Garden Party at Government House, 21 April 1974; various certificates, letters and documents relating to his various forms of employment which included the R.A.F. (1970-72); Royal Honk Kong Police (1972-76); Leeds Polytechnic College (1977-80, BA); Ballast-Nedham Group, Saudi Arabia (1981-83); Leeds Polytechnic College (1984-85, LLB); Ministry of Defence, trainee intelligence agent (1986-87).