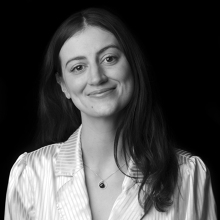 Graduating in 2012 with a degree in History of Art, Jessie joined Bonhams Auctioneers as an intern at their Oxford saleroom. She was promoted to the Jewellery Department in 2014 as a trainee cataloguer.

After leaving Bonhams in 2015, Jessie went on to work within the jewellery retail trade as a sales associate and repairs administrator for one of Oxford’s oldest jewellers and silversmiths, where she gained valuable experience.

Jessie joined our Jewellery team in 2020. A member of the Society of Jewellery Historians, she has a particular interest in early 19th century revivalist jewellery and early 20th century Art Nouveau.

Jessie holds the FGA gemmology qualification and is an Auctioneer for the jewellery department.